A walk with Andrew Konecki is never, ever boring! When he offers a gentle downhill stroll, aiming to “arrive for lunch at 13:00 hrs but it will not be a problem if we are early”, Beware! Remember that his legs are longer than most and certainly a lot longer than mine. So the aim was “Train to Les Pléiades and stroll down to Blonay, leaf peeping on the way. This not too strenuous exercise would be followed by a convivial meal”. What could possibly go wrong?

Well, Von Molkte famously said that no plan survives contact with the enemy. In this case, the first enemy seemed to be weather. As we prepared to leave home, there was torrential rain and high winds. Oh, this was going to be FUN, remembering Andrew’s “We will go whatever the weather” dictum. However, even the weather gods do not ignore Andrew. It quickly cleared up and we had a nice bright walk throughout.

The next glitch was the train. “Meet in Vevey station at 0930 for the MOB to Les Pléiades”. One day I will tell you about a friend of ours; a railway buff who has travelled all over the World. Ten years since he last visited here, he is still rambling on disbelievingly about his Swiss train being late. He would have been speechless that Michael’s train was not just late. It was stuck outside Vevey station. A quick phone call led to Gary keeping his foot in the door to stop the MOB train leaving until Michael arrived. It worked. The driver came to see what was the problem and agreed to wait. Sandra Darra and the Robertsons scrambled onto the train at Blonay. An unforeseen benefit of this was that it allowed us to identify our destination when we finally got back there.

After a nice gentle ride uphill we reached the station at Les Pléiades and debated on the best route down. The local antelopes were all au-fait with tracks but not so keen on the road down. Subsequent to a discussion about the BRA’s accident insurance, the tracks being covered with slippy leaves and not everyone being mountain goats, the road it was — but not the main road. Instead we took the long and winding road. (Cue song.)

After a short path alongside the railway and the obligatory photo (I counted them all out!) the group set off downhill. Group? Forget that. Each found their own pace for strolling downhill and admiring the scenery. And it was well worth admiring. Rolling pastures, fringed by trees decked in all sorts of autumn colour. Rocky peaks, some snow-capped, below an ”interesting” sky. Small hamlets with remote, quaint old chalets albeit with the local security company’s hands-off sign on the door. All made for excellent phot opportunities.

Our next surprise was that Gary’s Mobile Catering had set up a coffee stall near to a wooden carved man who was possibly a frozen remnant from a previous BRA walk. Sustained by Gary’s coffee and Sandra Darra’s out-of-date MOB biscuits, we marched/plodded/staggered on. There are some walks where you can see the destination and calculate how long to get there. This walk had what travel agents call “constantly changing vistas”; undoubtedly very scenic but not ideal for calculating a route march. Each of our party had their own way of enjoying the route. Andrew had arranged for part of the route to be dug up and blocked to provide a mini-obstacle course complete with fumes. (I am not a Celebrity. Let me out of Here.) Michael & Di filled in their walking time by reminiscing about their getting in and out of East Berlin in the 1960s. Was it that memory or just that he was feeling hungry which induced Michael after some distance to follow Rule One For Walking: If you want to arrive on time for the meal, go by train. While the hungry sprinters raced Michael to the restaurant, Andrew and Graham walked together discussing the local area and the state of the UK economy until Graham realised that Di and Sandra Seewer were behind us. Knowing that Di’s sense of direction could have them walking back uphill, Graham sat on a bench (bliss) to wait for them. From this stage, I have no idea how the others found the restaurant. We three found a sign that said Blonay and followed the snow poles downhill until we recognised Blonay railway station. (I counted them all in!)

Remember that I said that this outing was in two parts; a walk and a meal. We stragglers arrived as the waiter announced that there was no plat de jour left and the others were finishing their meal. However, the plat de jour was not of its best, so we late arrivals enjoyed a nice pasta. Rule Two For Walking: If you want the best meal, arrive late. To round out the meal, Gary handed out some Italian Baci sweets, each with a short philosophy inside. Mine was all about the importance of beauty which, looking as I did by this stage, did not make me feel any better.

Andrew and Kay started on the ceremony of splitting the bill, a project which CERN could apply itself to instead of easy tasks like splitting atoms. Meanwhile, in the corner Sandra Darra was doing a roaring trade in signatures for pension forms. When all this was done, we congratulated each other on an enjoyable event, thanked Andrew for opening up these new vistas to us and then dragged our weary bones away, vowing to come together again some day for another interesting stroll. 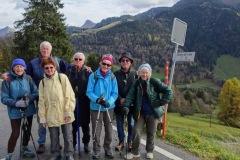 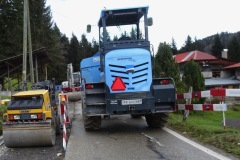 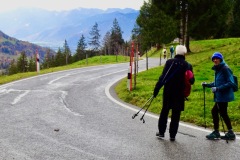 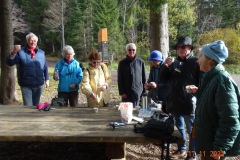 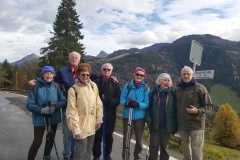 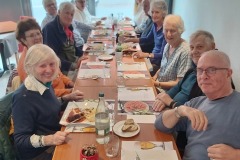 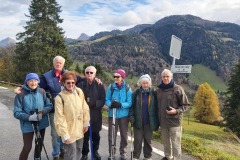 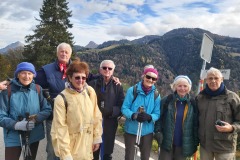 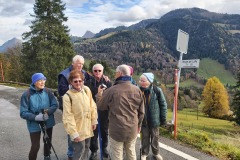 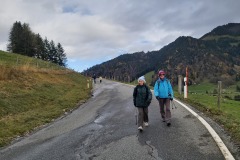 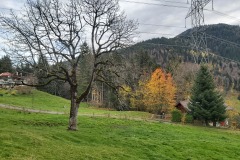 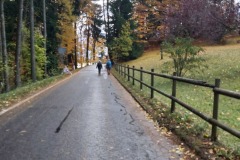 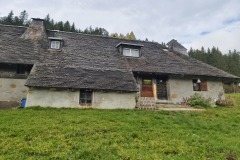