This beautiful château was built between 1706 and 1712 by Gabriel Hernri de Mestral, and stands on a former fiefdom, and site of a medieval fortress. The seignory of Vullierens was passed through marriage, or inheritance until it became the property of the Bovet de Mestral family.

A Vullierens noble family can be traced back as far as 1216, when Vullierens was part of the barony of Cossonay. Records reveal that in 1308, Pierre de Duin seigneur of Vufflens, was granted permission by the Lady of Cossonay, to build a fortified house. A surviving boundary plan, dated 1685, reveals gardens, orchards, and a magnificent impressive tower with machicolations ( openings through which stones or burning objects could be dropped on attackers). The fortress was demolished to make way for the present construction.

The wings, outbuildings, the orangery, and the magnificent formal gardens with their wide alleys, testify to the skill and care that went into designing the estate. The gardens themselves were re-landscaped in the 18th century and transformed again in the 19th century. During late May and early June, there is a three week period where one can view magnificent displays of irises, rhododendrons, bluebells, peonies, and azaleas. An American lady, Doreen Bovet, married to Bernard, a doctor who incidentally, ran the La Prairie Clinique, in Clarens, sowed the seeds – quite literally!- for these famed gardens between the years, 1966 and 1988.

Making a tour of the château, I came across in an outbuilding a magnificent medieval ice pit, only discovered in 2018, during restoration work. During the winter months, ice was collected from the lakes and rivers and dumped into these pits, which invariably were north facing. Straw, branches, and earth were piled on top of the ice, to aid insulation, and buckets of water were thrown in periodically to fill any gaps in the ice pack. `There was a servant whose sole responsibility was the collection and provision of ice ( maybe not cubes for the seigneur’s gin and tonic !! ). However, records from the 17th and 18th centuries reveal that sorbets, and even ice cream were made, and consumed during the summer months. So, maybe in those days life was quite tolerable.

What else caught my eye on my tour ?- A magnificent sequoia tree; did you know that this species is arguably the largest living organism, if only for the reason that it is so fast growing. I came across a mulberry tree which I learnt, contains silk in its leaves; mulberry leaves especially those of the white mulberry, are the only food source for the silk worm. Mulberry trees produce a large amount of pollen in the spring, and very sweet and tasty fruits in the autumn.

You will see from the accompanying photos that there is a large sculpture garden at Vullierens, by artists, maybe not as well known as those whose exhibits grace the sculpture garden at the Gianadda in Martigny.  However, many of them are just as impressive, dotted around the gardens, and augmented in their stature, by the magnificent backdrop of surrounding vineyards, undulating countryside, the Alps and the Jura.

Not much more to do after the visit, but go and have a glass of the Vullierens chasselas. Sadly, I had to drink it on my own; no one who had signed up for the visit, was able to attend. Nowadays, it’s a lonely job being chairman of Romandie East. I’ll be returning in May 2022 to these magnificent gardens. Try and come then. 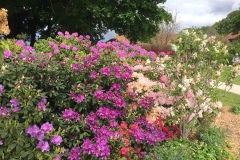 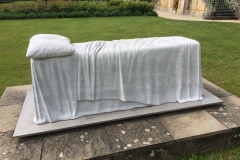 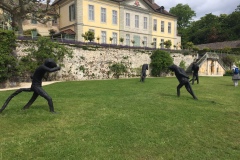 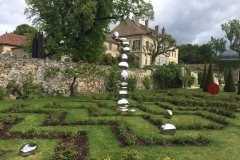 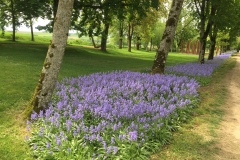 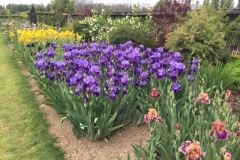