This was a very stylish lunch held in the Palace du Peyrou, Neuchâtel. This classical building, built between 1771 and 1776, by Pierre Alexander du Peyrou (1729-1794), who made his fortune in Surinam, is a fine example of French architecture. In the reception room where drinks and canapés were to be served, a graceful example of a Faience stove, manufactured in Bern in the 1770’s was on display.

Members did not linger there long, as in the elegant dining room was a blazing log fire for all to stand around to chat and enjoy the apéro. Called to be seated by Joy Sandoz, our hostess, at each place was a Christmas cracker, which when pulled, presented rather nice gifts, cufflinks, money holders, meditation stones, and more. Lunch, plus seconds, vanquished, the Australian chef, Craig Penlington, ceremoniously entered carrying two large flaming Christmas puddings. After, a brief time to allow matters to settle, room was for found to enjoy slices of Joy’s delicious homemade Christmas cake with coffee.

Different members of the BRA have had their wedding reception held at the Palace du Peyrou. Poignant recollections of past years shared and enjoyed.  There was an opportunity to see the other reception rooms which were as elegant as the one in which lunch was held. In one, a young couple were starting out their shared life, as they negotiated their wedding reception needs with a staff member.

As we walked out though the large double front doors, the Palace on that day seemed to stand for contentment, comradeship, life time achievement, an abundance of good food, which to some might seem contradictory, since the building was built partly on the proceeds of slavery. Maybe in a doubtful attempt to make amends, du Peyrou agreed to finance the first publication of Rousseau’s complete works in 1788.

Did he make that momentous decision in the same room where the BRA membership so much enjoyed Christmas lunch? 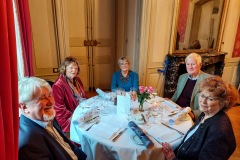 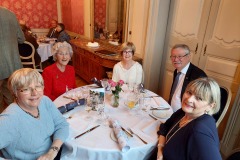