Molly Arnold from the NW Region suggested a trip to Gruyères and this writer devoid of any innovative ideas as to excursions, gratefully took up her recommendation.
Under the coronavirus prevailing rules, we had to eat at a restaurant with outside tables, with adequate protection
against inclement weather conditions, and with the restriction of 4 to a table. I envisaged that attendees would conveniently number 12; 3 tables of 4.
In the end we were a lively company of 10, with members representing Zurich, Aargau, Basel, Sion, Vevey, and St.Légier.
I had planned a brisk walk before lunch along the medieval main street, up to the Castle, look in the windows of the HR Giger Café, the design of which follows the artistic concept of Ridley Scott’s film, “ Alien “ made in 1979; then back along the battlements, hopefully with each of us having roused a healthy appetite.
That idea was unanimously dismissed, and the call arose “ where is the nearest place to have a coffee”. From then on, the party took on a life of its own.
The “ Alien “ would have thought that this group had been imprisoned socially for 18 months !!- I had to gently remind them that we would be late for lunch.
Would we have enough energy after eating to go up the hill to visit the medieval Castle ? Especially recommended were the 4 roundels painted by Corot in the Grand Salon. Some tried to but did not make it as far as the castle gates.
Back to the lazy alternative, linger over coffee with the Gruyères dessert speciality, meringue with locally made double cream.
For most of us this was the first BRA non-Zoom social event since the beginning of the pandemic.
Hopefully, there will be more events to come. 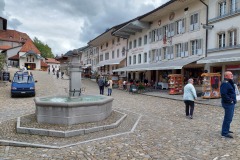 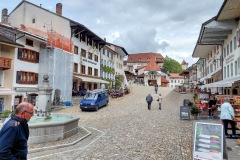 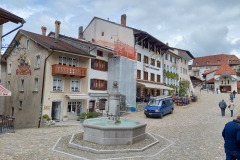 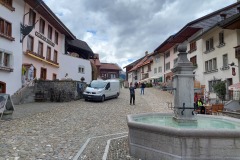 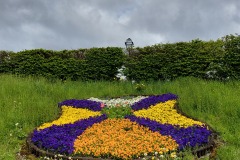 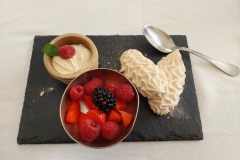 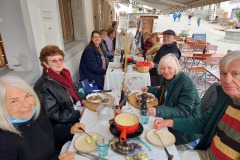 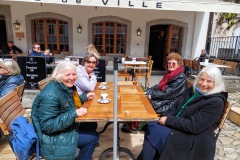 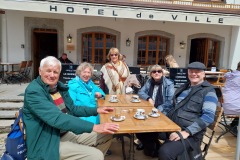