A stalwart band of 10 members braved the inclement weather on Friday 2 October to enjoy a guided tour of Geneva’s Botanical Gardens, the first ‘live’ event for RW since the lockdown started in March. Symptomatic of how much such events have been missed in Covid-19 times is that we were joined by Andrew Konecki, Chairman RE, who has been equally frustrated in organizing social visits and gatherings.

The tour was animated by our cheerful, enthusiastic and learned guide, Heather Macdonald, garden designer and horticultural expert, who had us smiling from the outset with her tale of how she had stumbled into her vocation from a degree in English Literature at Cambridge University and a stint at Procter & Gamble.  She led us on meandering paths, over damp grass and slippery stones, through rock gardens and climate-sensitive garden houses, with a constant flow of fascinating information.

We learned that the botanical gardens date from 1904 in their present location on the intersection of the Avenue de la Paix and the Route de Lausanne, but had been originally established in 1817 at the Parc des Bastions (apparently something of a swamp in those days, but very conducive to floral and herbal plants).  With around 6 million specimens, the collection of the Botanical Gardens is one of the most important in the world.

We gazed in awe at a 400-year old oak, which has two sets of roots, deep-rooted for stability and surface roots for feeding, while its heavy lower branches reinforce themselves naturally for support.  We also learned that communities of trees communicate with each other and can actually feed and protect their neighbours.

Hester then pointed out the Metasequoia, believed extinct in 1940, but rediscovered in China in 1941, considered a ‘living fossil’, because dating from 200 million years ago; the garden’s version (photo) is some 35 metres high and noteworthy for its absolutely vertical growth.

We sniffed vigorously at a large flowering shrub with an unpronounceable Latin name, with each of us detecting a different scent – jasmine, rose, vanilla, fruit, etc.  It was something like describing a fine wine.

We studied – somewhat cautiously – a collection of carnivorous plants, with Hester describing with glee how they enticed, suffocated and then devoured insects.

We admired the beautiful outdoor flowering of various autumn and winter varieties, noting that the rhododendron we were examining was actually an azalea and that the vivid yellow crocus is called a crocus but is not a crocus.

We learned that the Botanical Gardens maintain a website https://ge.ch/tericasaisie/ which locates all the ‘remarkable trees’ in the Canton.  Everyone was encouraged to check those in their immediate neighbourhood.

Our walk ended at the doors of the park’s restaurant, Le Pyramus.  A small group of us folded our brollies and stayed on for a very pleasant plat de jour and some lively conversation after the morning’s exertions.  Thank you to Hester for an inspiring and entertaining visit.  We shall be looking out for her next garden tour with great interest. 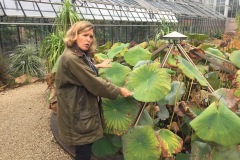 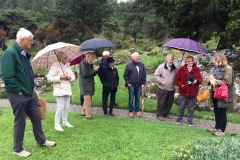 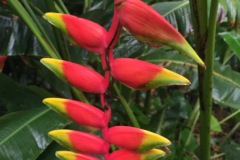 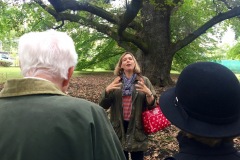 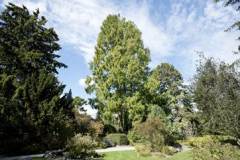