RE – QBP, CROQUET AND PICNIC

The sun was shining brightly and the mercury was rising as a group of BRA Members and friends met at the grounds of the Aproz football club in Sion – Châteauneuf, armed with sun cream, sunglasses and hats for the day.

The flags and bunting were put up early, so that everyone would know where to find us; we had fresh flowers on the tables which added to the charm of this countrified setting.

People arrived with their picnics and Deborah, Rosy, Diane and friends greeted everyone with fresh Pimms and a table filled with delicious light bites of cheese and pineapple, olives, nuts, ham croissants. Everyone had name stickers so contact was easy, some members had made long car or train journeys to be with us.

Our Chairman called for everyone’s attention and we raised our glasses to toast The Queen and the Swiss Federal Council. We then all tucked in to our lunches and hydrated ourselves with drinks in preparation for the very hot afternoon ahead.

The President of the Swiss Croquet Association, Dave Underhill and his wife Vicky then organised us into teams and the games got under way.
When the first round had been played, scones baked by Sonja earlier that morning were served with butter, jam and cream and then the next round of the games continued.

The finalists were Peter with Anne and Deborah with Joy, after three hoops each in the final game Anne touched the peg first, winning the point, game and match for her team.
Prizes were then given by our Chairman to the winners and “Thank you” gift to Dave & Vicky for their organisation which made the day a great success.

We then packed up our picnics into our cars and headed home, having had a most enjoyable day. 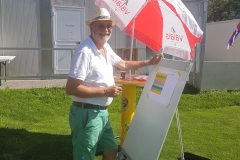 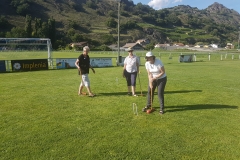 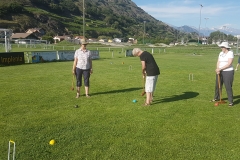 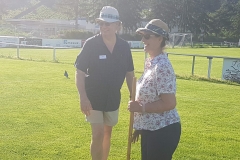 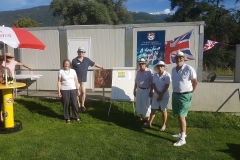 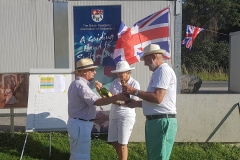 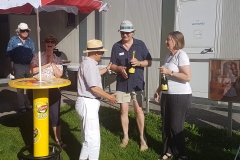 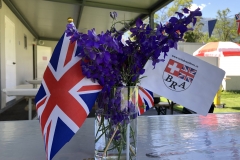 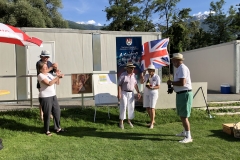 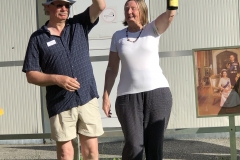 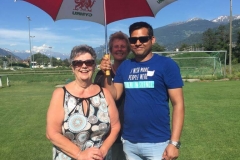 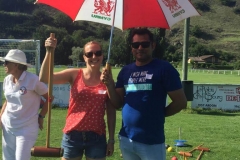