We were a group of nine who drove up through the shady forest to the village of Saint-George, at 944 m up in the hills, north of Nyon. It was a very hot and sunny day, but up in the quiet Jura, the air was a bit cooler and not stifling like down near the lake. There was a lovely breeze which was much appreciated!

The ancient mill dates way back to 1548 and was originally built as a flour mill. It is surrounded by meadows and forest, and the banks leading down to the entrance of the building are covered with wild flowers and butterflies. The building became an important saw mill from 1816 onwards, and was in use right up to 1960!

In 1983 a couple of young farmers, Laure and Valentin Piaget bought the mill to save it from abandon. The “Fondation pour la Sauvegarde du Patrimoine Artisanal” was founded in the same year and with the enthusiasm and help of its volunteers, the mill has been completely renovated and is in full working order. It is now a listed historical building.

The president of the Fondation, M. Fritz Germain, gave a most interesting guided tour of the mill and the small museum. His ancestors, Jean-Henry and Jean-Louis Germain owned the mill in 1837!

The enormous waterwheel (6.5 m in diameter and weighing 2500 kilos!) was rebuilt in 2013 and is put in action for visits.  Known as the ”soul” of the building, it was amazing to watch it begin to turn with the water channelled down from the pond. The countless wheels, belts, pullies and mechanisms began to move in turn, and then we saw (and heard!) the saws in action. Quite spectacular!

The museum is a treasure trove of old agricultural machinery, wooden objects galore, including the first wooden skis made in Saint-George and also full-size wooden carvings of lumber jacks and horses, made by a local artist, Paul Monnet. Other such wooden statures are to be seen in the village.

We are indebted to M. Germain for his guided tour. He is a fountain of knowledge of every nook and cranny in the mill and as it is his passion, he was able to explain how everything worked.

Following the visit, we enjoyed a delicious lunch on the terrace of the Auberge du Cavalier, with views of the Lac Léman in the heat haze in the distance. White wine from Tartegnin was most refreshing, and for dessert, the “café gourmand” was said to be one of the best!

A fascinating visit, a good lunch and excellent company and taking place in Saint-George, the Patron Saint of England, what a fitting destination for the BRA!

The Association accepts donations of antiques connected to the mill, farming implements, wooden tools, etc…
(Do YOU have forgotten treasures lurking in your cellar or loft, collecting cobwebs, that could join the museum?)
”Open Days” at the mill for the public in 2019, will be on Aug. 3rd, Sept.1st, Oct 5th and Nov.3rd 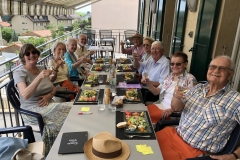 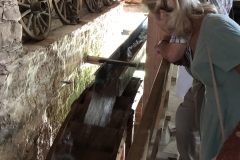 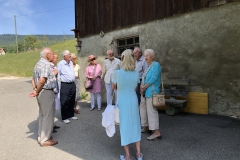