There was a small party of us wending our way like many a pilgrimaged before us up up up the hillside of Monte di S. Maria di Albigorio.  We drove through the clouds and nestling, hidden among the trees above Tesserete, we found the Convento Santa Maria del Bigorio.  Today it is a place of retreat and spiritual meditation run by a handful of Capuchin Friars.  Since it’s conception in 1535, as the first Franciscan order on Swiss soil, it’s been devoted to Catholic renewal though silence and prayer.  Not open to tourists, except by request or invitation, it offers a place of peace for religious groups and clergy and has 1500 visitors a year.

The cloister, a quadrangle bu8ilding in local stone with a classical red tiled roof, is centred around a small sloping courtyard which collects rain water.  Attached at the rear is a small church.  The cloister has many windows overlooking the terraced gardens below where we saw brightly painted bee hives.  Each window represents a cell where the friars and their guests sleep  These rooms are very simple, a bed, a desk and chair, all carved from the local walnut trees and polished with age.  The cells face out while a corridor runs around the inside of the building with rooms facing the inside courtyard, with communal rooms like the old library and the refectory.

Down in the basement, with a beautiful low brick vaulted ceiling, is a modern chapel designed by our local architect Mario Botta in 1965.  The historical life of the friars was depicted in a museum adjoining the church.  It illustrated the isolation and rigour of such a devotional life.  A notable treasure exhibited was an expressively carved and painted wooden life-sized Christ, unusual in that it had articulated arms, once placed on a cross in processions.  The chancel with a Baroque inlaid wooden alter is separated from the choir by a solid stone wall.  Small doors with grills above them either side of the altar permits the brothers to hear the service and the people in turn their prayers yet keeping that important division of privacy.  In the altar itself, there is an opening so the brothers in the choir can receive the sacrament.  The altar piece is a 17th century painting in rich colours on oakwood panels of a pretty Madonna handing an apple to the child.  Curious, was the blue parrot perched on a fruit bowl in the foreground.  We were told this is a common image in religious art.  The bird is supposed to represent  the repetition of the words of God.  In this case AVE as in hail Maria.  The nave is lit by a modern circular stained glass window in the style of Chagall.
The slow pace of a contemplative life is not for everyone, yet we saw their appreciation of the beauty of God’s creation in each small detail.  A hidden treasure on our door step. 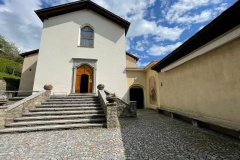 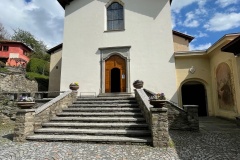 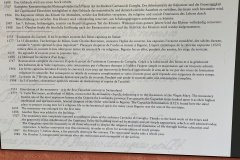 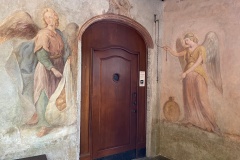 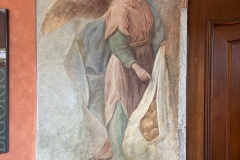