VISIT TO THE SALT MINES, BEX

According to the legend, a shepherd, in 1640, noticed his flock licking the rocks above le Bouillet and so the salt industry was born. The rock is gypsum, which is very absorbent; it was during the Triassic Period (180-220 million years ago), that the oceans evaporated creating an industry that was hugely important to the local and national economy. In addition to salt extraction, Bex-les Bains became a major tourist centre in the 19th and early 20th centuries. “The sickly, the impotent, the ill, and the dying will leave cured “, so the publicity blurb stated at the time. They came in in their hundreds of thousands looking for the elixir of life.

I could not be certain that any of our group fitted into the above categories, but they were agile enough to board what can only be described as a claustrophobic railway tube, for a 15 minute journey into the mountain. We disembarked, to follow a cavernous route with our audio guides attached to our ears. It was tough being a miner, even up to the early 20th c. Fatalities were numerous so one should not complain about the railway carriages and what was a long tour underground, lasting nearly 2 hours. There is a statue to St. Barbe, the patron saint of miners at the mine entrance. Extraordinarily, there are 50kms of galleries.

Presently, 35,000 tons of salt are annually mined by thermo-compression. 80% of the salt manufactured is used for de-icing the winter Vaud roads: 10% is sold for cooking salt and the rest made into cosmetic products. Bath salts are a popular sale product, and our guide told us that our skin would tingle with this Bex product. Some of us succumbed to the sale patter.

Three or four in the group had been before. One was brought by his parents 50 years ago. Others had not been for 20-30 years. It was a trip down memory lane, for though the industrial equipment to extract the salt has been modernised, the buildings, the train, the caverns, were unchanged. 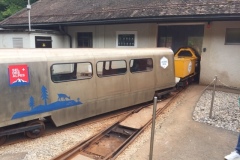 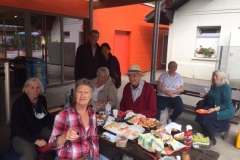 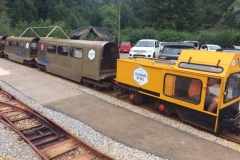