VISIT TO THE TURNER EXHIBITION AT THE KUNSTMUSEUM IN LUCERNE

A contingent of 13 BRA members from Ticino went North by train to meet up with our Vice Chairman Angela Meier Jones and her group coming from the North West region for our cultural day out.  The 9th of October was a very wet Autumnal day outside, but nobody had to brave the elements. Instead, our rendevous was indoors to admire the weather captured on canvas so expertly by another Brit, one Joseph Mallord William Turner.  Our respective groups caught up first over lunch together at the World Café,  situated in the Kunstmuseum itself right beside the railway station. After disgarding our coats and bags we entered the exhibition on the 4th floor armed with our very good audio guides. In the well lit, spacious rooms with high ceilings the Kunstmuseum of Lucerne had displayed 171 of his works under the title of « The Sea and the Alps ». This collaboration, a first with the Tate Gallery of London, was in honour of the 200th anniversary of the Kunstmuseum.  This excellent exhibition gave the visitor a well rounded picture of the varied  technical styles Turner was capable of and how he continued to experiment with them throughout his long active life.  It raised the great themes that fascinated him, and the places that inspired him giving special attention to Switzerland and it’s dramatic and majestic landscapes.

His art work reflects the turbulent times through which he lived. William Turner (1775-1851) was born in Covent Garden to working people.  He was a true Londoner witnessing  life along the River Thames, baptised in St Paul‘s church and interred in St Paul‘s Cathedral.  His father was a barber and whig maker and his mother’s people were butchers.  His sister died aged 5 when he was only 8 and his mother suffered hysteria and moments of violent anger.  Diagnosed as mentally incurable,  she was sectioned and placed in Bethlem an insane asylum in 1804. Turner never married, although he had 2 daughters out of wedlock.  It is suggested he internalised his distress, and immersed himself in his craft.  Attending the Royal Academy of Arts aged 14, he was exhibiting his work there and made a member by the age of 24. First opening his eyes in the reign of George III he finally closed them in the reign of Victoria aged 76. Famous in his own life time, he bequeathed his work to the British Nation upon his death.   Arriving into the world as the British territories were lost in the Americas,  with meyhem across the channel,  and a King beheaded in the French Revolution.  The Napoleonic Wars then raged in Europe and kept Britian’s navy busy at sea. The Battle of Trafalgar was in 1805 and only by 1815 at Waterloo was Napoleon defeated.  It was a period of Enlightenment and the Industrial revolution, with scientific discoveries, new technologies and new ways of thinking. The Age of Reason, Man pitting himself against authority be it Monarch or The Church.  Britain became Great Britain in 1803 by absorbing Ireland.  All this social upheaval was his back drop.  Encouraged by his father, schooled as an architectural draughtsman and watercolourist , he travelled the British Isles with his sketchbook working until, in 1802, there was a break in hostilities. This enabled him to take his first Grand Tour to the continent and Switzerland.  William Turner is classified as a landscape painter of the Romantic period.  A popular contemporary of his John Constable, famous for his pastoral British landscapes, felt  „he could not feel satisfied with scenery, however grand in itself, that did not abound in human associations he required villiages, churches and cottages“  He said that „the solitude of mountains oppressed his spirits.“  In contrast, Turner was the opposite, he painted Landscapes full of light, dark energy and movement of biblical proportions, he sought out the mountains.  A recurring theme, is his understanding of the sheer power of Nature.  Human subjects in his paintings are always tiny set against the immensity of the natural world. He evokes all this turbulence in his depiction of mountains , skies, seas, storms, the very weather, wind, water and the refraction of light through the atmosphere.  Turner is more reminiscent of a German painter of this period,  Casper Friedrich who in (1818) painted « Wanderer Above the Sea of Fog.“  A man alone on a rock facing the raging waters falling around him.  This is in artistic terms,  what they call „Sublime“.  Turner achieved this in the eyes of his peers.  It means,  where greatness goes beyond measurement or imitation.  Turner transcended with his skill and vision and captures Awesome moments. Burke in 1757 describing Sublime in terms of“ darkness, obscurity, privation, vastness, magnificence, loudness and suddeness and that our reaction (as observer) is defined by a kind of pleasurable terror or delightful horror“.   Thackery said of Turner’s work  « it affects the imagination like music or poetry. »  It is in Switzerland that Turner discovers  this inspiration. The Painting „The Fall of an Avalanche in the Grison“ (1810) shows this horror when a cottage is crushed by the snow, your imagination can almost hear the noise. Or  „The Mer de Glace“  where you feel the Glacier moving like a solid sea between the rocks. Ruskin his friend wrote in his book on modern painters in 1843 „Ordinary viewers saw only its solidity, but Turner recognised that the wonderful thing about it was it’s non-solidity“.   Many more paintings on display illustrated the hardship of travelling by stagecoach in the Alps. For those heading south „the Alps were still merely a tedious hindrance on the way to Italy“. Not for Turner,  he paints „The Schöllenen Gorge from the Devil’s Bridge on the Pass of St Gotthard“ (1802).  Clearly he is captivated by the roads clinging to the plunging cliff faces, shattered trees and soaring mountain peaks, as his drawings testify. However,  in total contrast the other side to this character is the patient man, obssessed  producing again and again variations on the same theme with his water colours. From his hotel window in Lucerne he paints The Rigi in all sorts of lights according to the time of day and the weather. These hazy peaceful scenes are studies in colour with washed looks that remove all hard definition, merging waters and reflecting skies and shadows.  These sojourns in Switzerland he comes back to again and again in the four consecutive years between 1841- 1844. Visiting Ticino and Lugano in 1842 and 1843 but always ending his tours in Basel.

They call Turner modern, in that he bridges the gap in his experimentation with colours and horizons, clouds, mists and smoke until his dipictions of nature are less graphic, more abstract in his later works.  The movement is still there and the weather. In the new age of science observing weather was a passion.  In 1803 a book was published on clouds. Art critic Ruskin called it « cloud worship » a passion to paint real clouds accurately.  So Turner did alot of sky gazing painting clouds, sunsets,  sunrises and rainbows faithfully in water colours. Little did he realise that a volcanic eruption in 1815 in Indonesia dumped vast amounts of dust and gases into the air which travelled across Europe changing weather patterns and enabling him to witness some unusual atmospheric phenomena and spectacular sunsets. This observation makes him a very modern man when we consider climate change today.

Finally the last room exhibited, what I regard as an example of William Turners’ distinctive style making the Grand emotional Statement in Oils.  « Peace-Burial at Sea » (1842) depicts a black ship half in sail and half steam, lit amidst ghostly shimmering blues and silver of a night sky, with black reflections on the water caste by the moon. The water and the sky merge with this dark blue smoky effect emitting an eerie haunting sensation to the observer. It is unsettling and one critic said it was too sombre too black. Turner replied « If I could find anything blacker than black I’d use it ».  This illustrates he had his own voice, still recently bereaved and mourning for the death of his artist friend David Wilkie who had to be buried at sea.  This can also be seen in „The Fighting Temeraire“ (1839) A magnificent Seascape depicts an elegant almost ethereal tall ship being pulled up the Thames River by an ugly broad black tug belching fire from it’s funnel while a magnificent sun sets with golden blues on the distant horizon.  This is a real event romanticised, a ship that fought in the Battle of Trafalgar being towed to it’s last berth to be dismantled. The message is, the Sun is setting on an epoch in time. As again he makes a statement in „Rain, Steam and Speed“ (1844) The Great Western Railway. A Black steam engine crashing out of white smoke, fog, crossing a bridge coming directly at the observer somehow angry. This depicts the unstoppable advent of the industrial revolution.  Turner is indeed beloved, 170 years later, he has been given the honour to grace our new polymer twenty pound notes that will be in circulation soon.  As he agreed with Ruskin „Yes atmosphere is my style“ . He certainly shared with us his vision of the grandeur of the natural world and it’s elusive perpetual motion and mans place in it. 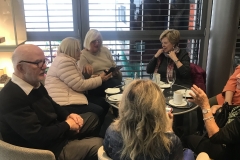 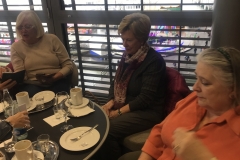 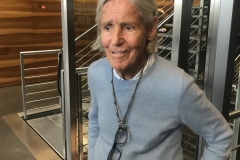 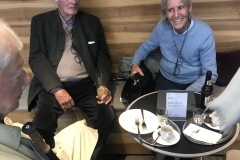 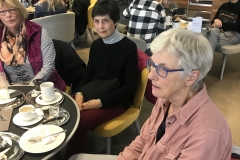 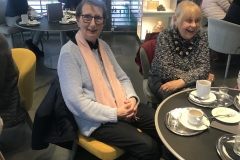